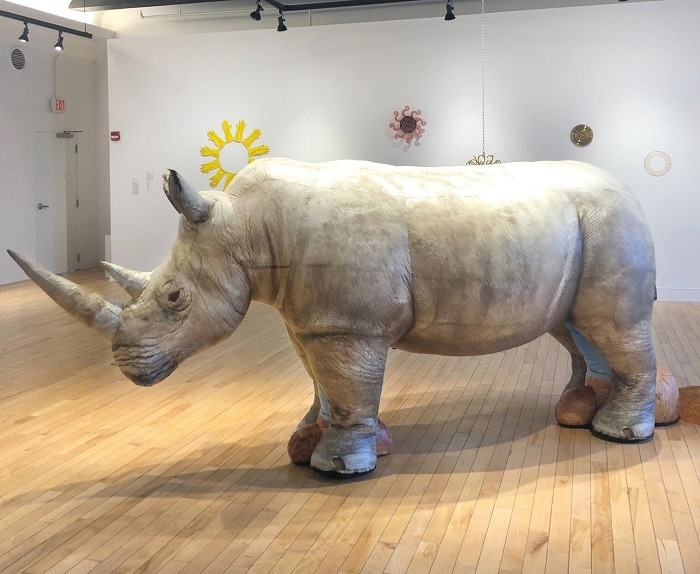 Victoria Fuller: Bring Back The Extinct Northern White Rhino
Epiphany Center for the Arts – July 01 to August 20, 2022 Chicago (US)

Bring Back the Extinct Northern White Rhino is Victoria Fuller’s tribute to an animal species that is functionally extinct. The last male northern white rhino, named Sudan, died in 2018. Two females remain. This installation features a realistic life-size replica of a rhinoceros, 13′ x 5′.5″ x 4.’ in vinyl with printed faux wrinkles and texture skin. It inflates and deflates repeatedly on a cycle of 3 minutes. When deflated, we are reminded that it is extinct. When inflated, it refers to the magnificence of the species when it was alive. As well as the attempt to bring it back by ” artificial reproductive techniques” with frozen sperm. Also, implanted eggs in a closely related subspecies. Inflation and deflation are also like lungs of inspiration and expiration, symbolizing the breath of life. Fuller created the project with a grant from the Chicago Department of Cultural Affairs (DCASE) to raise awareness of the extinction of animals in our lifetime.

The idea for this work of art began with Fuller’s observation of the sad heaps of deflated holiday lawn decorations that crumble onto people’s lawns when air is squeezed out of them. Like these lawn decorations, rhinos and many other wildlife are treated like a commodity. Worthless as living beings beyond the price they can fetch on the market. Rhinos are illegally killed by poachers for their horns, which are used in the Chinese medicine trade. Other species like pangolin and bats are used for meat and also used in Chinese medicine. The loss of this animal is a cautionary tale. Human hunting of wild animals and encroachment on their habitats are causing their extinction. Thus, we must do everything possible to prevent these magnificent creatures from disappearing. 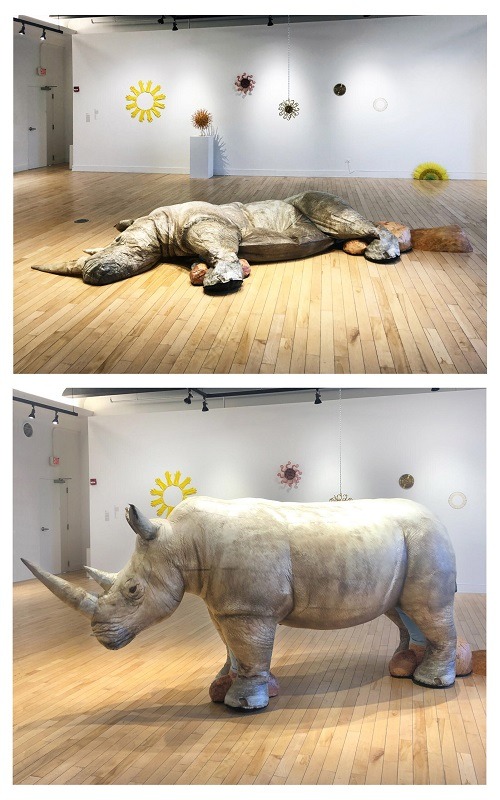