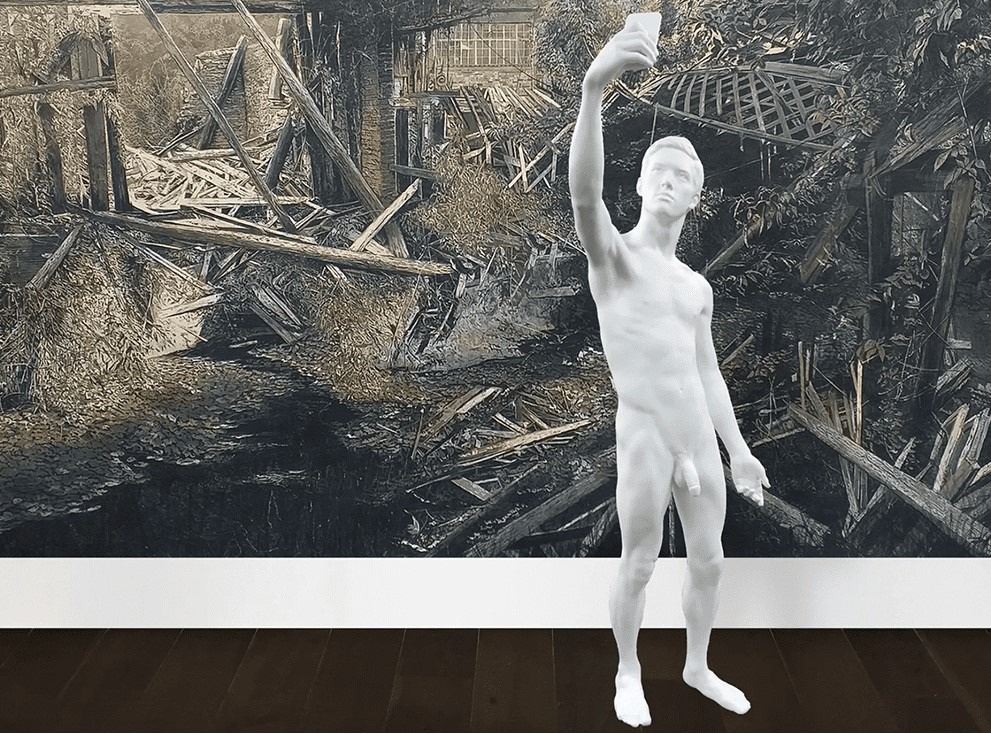 We are pleased to present “Elysian Fields”. An exhibition about the ever-changing relationship between the physical and the digital, explored through the work of two contemporary artists: Juliette Losq and Stuart Sandford.

Juliette Losq’s watercolors depict man-made environments in decline. Semi-industrial sites where human occupation has practically disappeared and where nature is regaining control. The intense labor involved in the creation of the vast paintings of Juliet contrasts with the abandoned subject matter. Thus, as if the physical labor that once belonged to these structures had found a new role in documenting their change.

Juliette’s use of watercolor is unusual in this regard, as the scale and complexity of the works contrasts with the medium’s traditional domestic role. The unexpected is also a theme in the imagery: there is an implicit presence lurking behind the abundance of detail. An unknown future hovering unseen beyond decay. In this sense, Juliette’s paintings are also imaginary theaters where opposing forces clash. Creation versus dereliction, the tangible versus the imaginary,the precise visual against the indefinite. They describe the uncertain moment when humanity re-evaluates its relationship with the physical world in the face of the seemingly limitless possibilities of digital creation.

Stuart Sandford’s sculptures explore the rapidly changing distinction between virtual and physical realms by revisiting the classical tradition of the ideal human form. Stuart finds the contemporary version of exemplar in the carefully crafted online self-images that serve as subjects for the gay male gaze. He renders them by 3D scanning to create a digital model of the new archetype, which will then be rendered solid in bronze. Marble and basalt using state-of-the-art carving technologies.